NVI is proud to announce Michael Beer and Mubarak Elamin's (of the Sudan Policy Group) recent and important piece on Common Dreams. In their op-ed, they call on the US to revoke its decision to extort $335 million from the Sudanese People. Sudan is one of the poorest countries in the world with not enough food or medicine for their citizens. Thus, punishing the people of Sudan for overthrowing their dictator in a nonviolent revolution is nonsensical.

Here is a short snippet from the article:

"US policies are adding to a nightmare for the Sudanese people who have just suffered from the worst flooding in a century. While the US wasted a year to free Sudan from this terrorist designation, Sudan was unable to trade worldwide and obtain support from multilateral institutions to rebuild its economy and deal with covid19. The US is extorting the Sudanese people for the terrorist attacks by Al Qaeda on US citizens. However the Sudanese people and the present government are in no way responsible for those criminal acts. It was the government of the Sudanese dictator Al-Bashir that protected Al Qaeda during the early to mid-1990s, prior to the attacks against U.S. interests in Kenya and Tanzania. In 2019, the Sudanese people revolted in a nonviolent struggle and successfully ousted the dictator and his ruling party. The new government has succeeded in signing peace agreements ending three civil wars.

The victims of bombings deserve reparations. If reparations are to be paid, let the US and Saudi Arabia lead the way. The US and Saudi are not solely responsible for Al Qaeda but their policies greatly boosted its growth. Al Qaeda was founded by Osama bin Laden who used the Saudi supported Salafi theology to create a violent group opposing non-Sunnis and, ironically, later to the Saudi monarchy. Its success was attributed to the presence of US troops in Saudi Arabia and by the US support for Israel."

Here is the full article.

This is part of our ongoing support for their brave nonviolent revolution. To learn more about their revolution, see our Webinar with Pramila Jayapal, Anthony Haggar, and other great leaders.

For those interested, please see the following links for more on this important subject:

Below is a mural in Sudan, thanking Michael Beer, Stephanie Van Hook, Stephen Zunes, Michael Nagler, Pramila Jayapal, Walter Turner and Steve Williamson ….for their steadfast support of the nonviolent campaign to remove AlBashir from power. 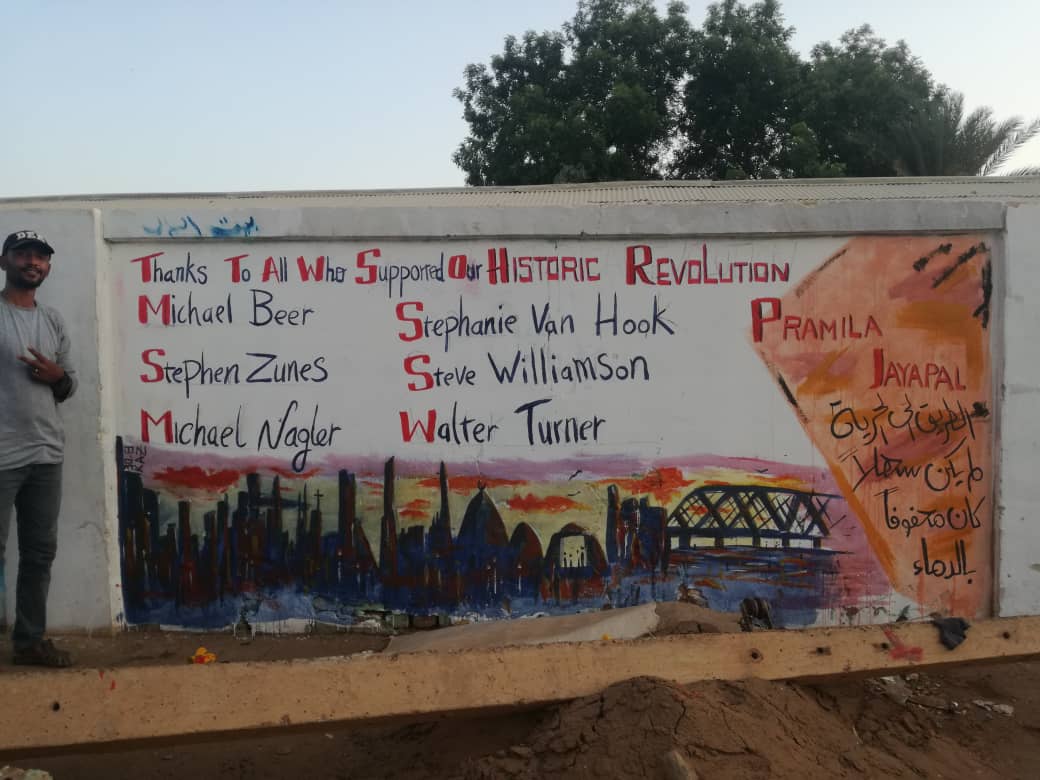 Stephen Zunes - Professor of Politics at the University of San Francisco with a concentration in strategic nonviolence. Long time supporter and colleague of NVI.

Michael Nagler - President of the Metta Center for Nonviolence Education, and Professor at the University of California, Berkeley. Long time support of NVI.