The Many Faces of Nonviolence - Angela Davis

The Many Faces of Nonviolence - Angela Davis 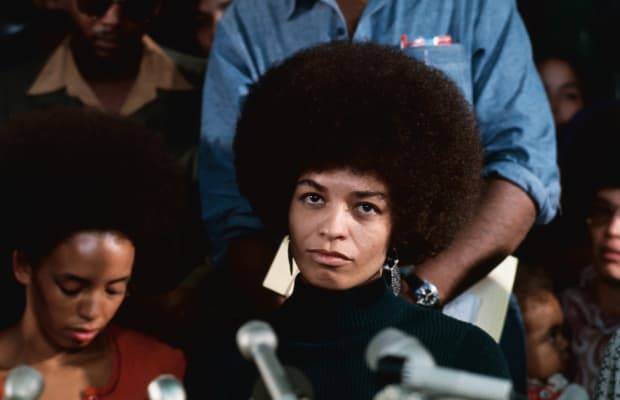 Angela Yvonne Davis is a lifelong civil rights activist, abolitionist, feminist - communist, author, professor, scholar, and more. She is widely known for her participation in the 1960’s uprisings against injustices and inequalities for Black people, people of color and oppressed groups in the United States and abroad; Davis was affiliated with the Black Panther Party at the height of their activism and helped build and lead the movement for prison and police abolition. Davis’ views on prison abolition and Black resistance come from her life experiences growing up in a segregated Birmingham, Alabama, and spending 16 months in a women's prison for her connection to the Soledad Brothers’ courtroom incident. She first came to prominence when she was wrongfully laid off from her teaching position at UCLA for her communist political views and affiliation with the Communist Party USA. After winning her lawsuit against the school, she was soon fired again for her use of inflammatory language.

Living in a segregated Alabama, Davis knew racial injustice all too well from a young age; her neighborhood in Birmingham was known as “dynamite hill” for the large number of homes targeted and bombed by the Klu Klux Klan. Violence has played a central role in Davis’ life, as much of it was spent trying to escape racism, homophobia, misogyny, and the prison industrial complex. One of the most prominent instances in her life took place during the Soledad Brothers’ trial in 1970. On August 7th, Jonathan Jackson, brother of George who was on trial at the time, stormed the courtroom taking the judge, prosecutor, and members of the jury hostage and hoping to exchange them for the release of his brother. Unfortunately, Jonathan, the judge, and others were killed during this incident by police, and the guns used to carry out the abduction were traced back to Davis. Going into hiding for over 2 months, Davis ended up on the FBI’s top 10 most wanted list and fled California as a fugitive. She moved at night, staying with friends and comrades until she was found in a New York City hotel, and was even labeled the “dangerous terrorist Angela Davis” by then President, Richard Nixon.

While in prison, Davis was interviewed and questioned by Goran Olsson for the documentary The Black Power Mixtape on her participation in the Black Panther Party, the Communist Party USA, and her characterization as a violent militant by the media. “Because of the way this society is organized, because of the violence that exists on the surface everywhere, you have to expect that there are going to be such explosions [revolutions]. You have to expect things like that as reactions,” stated Davis. In an interview with Black Journal in 1972, Davis said, “If there is violence in the process of waging a revolution, that will be determined by the ruling class, that will be determined by those who hold power.”

Davis has spent the majority of her life as an educator and activist, pushing the boundaries on how we view gender, race, and class. She is a highly regarded author and writes extensively on the intersections of identities and how those intersections affect the way one moves throughout the world. One of her most famous works, Are Prisons Obsolete?, discusses how gender, race, and class all affect the outcomes of one's life in the United States where the prison industrial complex looms over the lives of queer and poor people of color constantly. In a 2018 lecture on eradicating state violence, Davis said, “When we look at the struggle in Palestine, it becomes clear that state violence against Black communities in the U.S. cannot be eradicated by simply hiring better police officers, by hiring police who are less racist, or who have attended anti-racism workshops; And of course all the while keeping the police apparatus intact and that apparatus incorporates some of the histories of colonialism and slavery.”

Davis’ contributions towards Black liberation are continuing to inspire and lead a generation of abolitionists today. Her work is essential to the nonviolence movement, and helps others think critically about the structure of our society; systemic and institutional racism, classism and bigotry are not accidents of a flawed system, but rather, were intentional frameworks drafted into the fabric of our world to protect systems and people in power. Davis’ work force us to engage critically with our surroundings, and asks us to analyze the current political, economic and social structures in place today that frequently and continuously cause us harm. Her book, Are Prisons Obsolete?, make the connections of modern-day prisons to slavery in the United States. “Slavery, lynching, and segregation are certainly compelling examples of social insti­tutions that, like the prison, were once considered to be as everlasting as the sun. Yet, in the case of all three examples, we can point to movements that assumed the radical stance of announcing the obsolescence of these institutions.” Davis’ work illustrates the true perpetrators of violence in our society and calls for a paradigm shift on how we attribute and recognize violence. By challenging our pre-existing beliefs and inherent biases, she implores us to evaluate our way of life and take the steps towards building a world free of violence, with that violence being: racism, capitalism, white supremacy, homophobia and all systems of power and oppression.