Doomsday Clock Closer Than Ever to Midnight: Active Nonviolence Can Still Save Us

The world is facing a series of devastating interrelated crises. Our friends at the Bulletin of Atomic Scientists have just updated their well known and respected Doomsday Clock. No surprise to those following the news, but their Science and Security Board has declared that we are closer than ever before to apocalypse. They are announcing this news not to freeze us in fear, but instead to offer us a chance to act while we still can. And, act we must.

The time for small ideas is over. History has proven that powerful people’s movements can make what once seemed impossible become inevitable. Again and again we have seen that when people rise up together and declare they see a path out of the darkness, the world can change in major ways.

The crises we are facing provide us with an opportunity to create real and lasting change. Below, you will see that the Bulletin rightly considers the threats of climate change and nuclear weapons to be existential threats to our very existence. True, and only part of the picture. We also face a crisis of avoidable suffering worldwide. We can and must do better. For the future and for those suffering now.

Many people may see this clock ticking closer and closer to midnight and wonder what we can do. We often seem so small and the problems seem so vast. At Nonviolence International, we proudly declare that the world can be better than it is today and it up to us to direct that change.

Nonviolence International serves as a backbone organization of the global nonviolent movement. We provide fiscal sponsorship to some of the most amazing bold, creative, hardworking nonviolent movements worldwide. And, we provide much needed resources to activists and scholars all over the world.

Our Nonviolence Training Archive is live online now built in partnership with Kurt Schock and the Rutgers International Institute for Peace. This is the world’s largest archive of training material on nonviolence. Check it out at: http://nonviolence.rutgers.edu/s/digital

Within a few months, our longtime Executive Director, Michael Beer, will be publishing his first book - an update to Gene Sharp’s seminal work The Politics of Nonviolent Action, with our friends at the International Center for Nonviolent Conflict. This monograph, which was blessed by Sharp, includes 346+ powerful tactics of nonviolent action. We are developing an online database that will allow activists and scholars worldwide to learn from this resource. It will be a living document that grows as friends and allies provide feedback and new ideas. You can get a preview of the online database at: https://www.nonviolenceinternational.net/tactics

When we say… we are Building a Global Culture of Nonviolence and Building Hope in Troubled Times… we mean it.

2020 is going to be a pivotal year for our planet and we know active nonviolence can prove once again that it is indeed a force more powerful.

Please read the post below, share it, and commit to take action now and throughout the coming year to help create a better future for all.

It is 100 seconds to midnight

Editor’s note: Founded in 1945 by University of Chicago scientists who had helped develop the first atomic weapons in the Manhattan Project, the Bulletin of the Atomic Scientists created the Doomsday Clock two years later, using the imagery of apocalypse (midnight) and the contemporary idiom of nuclear explosion (countdown to zero) to convey threats to humanity and the planet. The decision to move (or to leave in place) the minute hand of the Doomsday Clock is made every year by the Bulletin’s Science and Security Board in consultation with its Board of Sponsors, which includes 13 Nobel laureates. The Clock has become a universally recognized indicator of the world’s vulnerability to catastrophe from nuclear weapons, climate change, and disruptive technologies in other domains.

To: Leaders and citizens of the world

Re: Closer than ever: It is 100 seconds to midnight

Humanity continues to face two simultaneous existential dangers—nuclear war and climate change—that are compounded by a threat multiplier, cyber-enabled information warfare, that undercuts society’s ability to respond. The international security situation is dire, not just because these threats exist, but because world leaders have allowed the international political infrastructure for managing them to erode.

In the nuclear realm, national leaders have ended or undermined several major arms control treaties and negotiations during the last year, creating an environment conducive to a renewed nuclear arms race, to the proliferation of nuclear weapons, and to lowered barriers to nuclear war. Political conflicts regarding nuclear programs in Iran and North Korea remain unresolved and are, if anything, worsening. US-Russia cooperation on arms control and disarmament is all but nonexistent.

Public awareness of the climate crisis grew over the course of 2019, largely because of mass protests by young people around the world. Just the same, governmental action on climate change still falls far short of meeting the challenge at hand. At UN climate meetings last year, national delegates made fine speeches but put forward few concrete plans to further limit the carbon dioxide emissions that are disrupting Earth’s climate. This limited political response came during a year when the effects of manmade climate change were manifested by one of the warmest years on record, extensive wildfires, and quicker-than-expected melting of glacial ice.

Continued corruption of the information ecosphere on which democracy and public decision making depend has heightened the nuclear and climate threats. In the last year, many governments used cyber-enabled disinformation campaigns to sow distrust in institutions and among nations, undermining domestic and international efforts to foster peace and protect the planet.

This situation—two major threats to human civilization, amplified by sophisticated, technology-propelled propaganda—would be serious enough if leaders around the world were focused on managing the danger and reducing the risk of catastrophe. Instead, over the last two years, we have seen influential leaders denigrate and discard the most effective methods for addressing complex threats—international agreements with strong verification regimes—in favor of their own narrow interests and domestic political gain. By undermining cooperative, science- and law-based approaches to managing the most urgent threats to humanity, these leaders have helped to create a situation that will, if unaddressed, lead to catastrophe, sooner rather than later.

Faced with this daunting threat landscape and a new willingness of political leaders to reject the negotiations and institutions that can protect civilization over the long term, the Bulletin of the Atomic Scientists Science and Security Board today moves the Doomsday Clock 20 seconds closer to midnight—closer to apocalypse than ever. In so doing, board members are explicitly warning leaders and citizens around the world that the international security situation is now more dangerous than it has ever been, even at the height of the Cold War.

Civilization-ending nuclear war—whether started by design, blunder, or simple miscommunication—is a genuine possibility. Climate change that could devastate the planet is undeniably happening. And for a variety of reasons that include a corrupted and manipulated media environment, democratic governments and other institutions that should be working to address these threats have failed to rise to the challenge.

The Bulletin believes that human beings can manage the dangers posed by the technology that humans create. Indeed, in the 1990s leaders in the United States and the Soviet Union took bold actions that made nuclear war markedly less likely—and as a result the Bulletin moved the minute hand of the Doomsday Clock the farthest it has been from midnight.

But given the inaction—and in too many cases counterproductive actions—of international leaders, the members of the Science and Security Board are compelled to declare a state of emergency that requires the immediate, focused, and unrelenting attention of the entire world. It is 100 seconds to midnight. The Clock continues to tick. Immediate action is required. 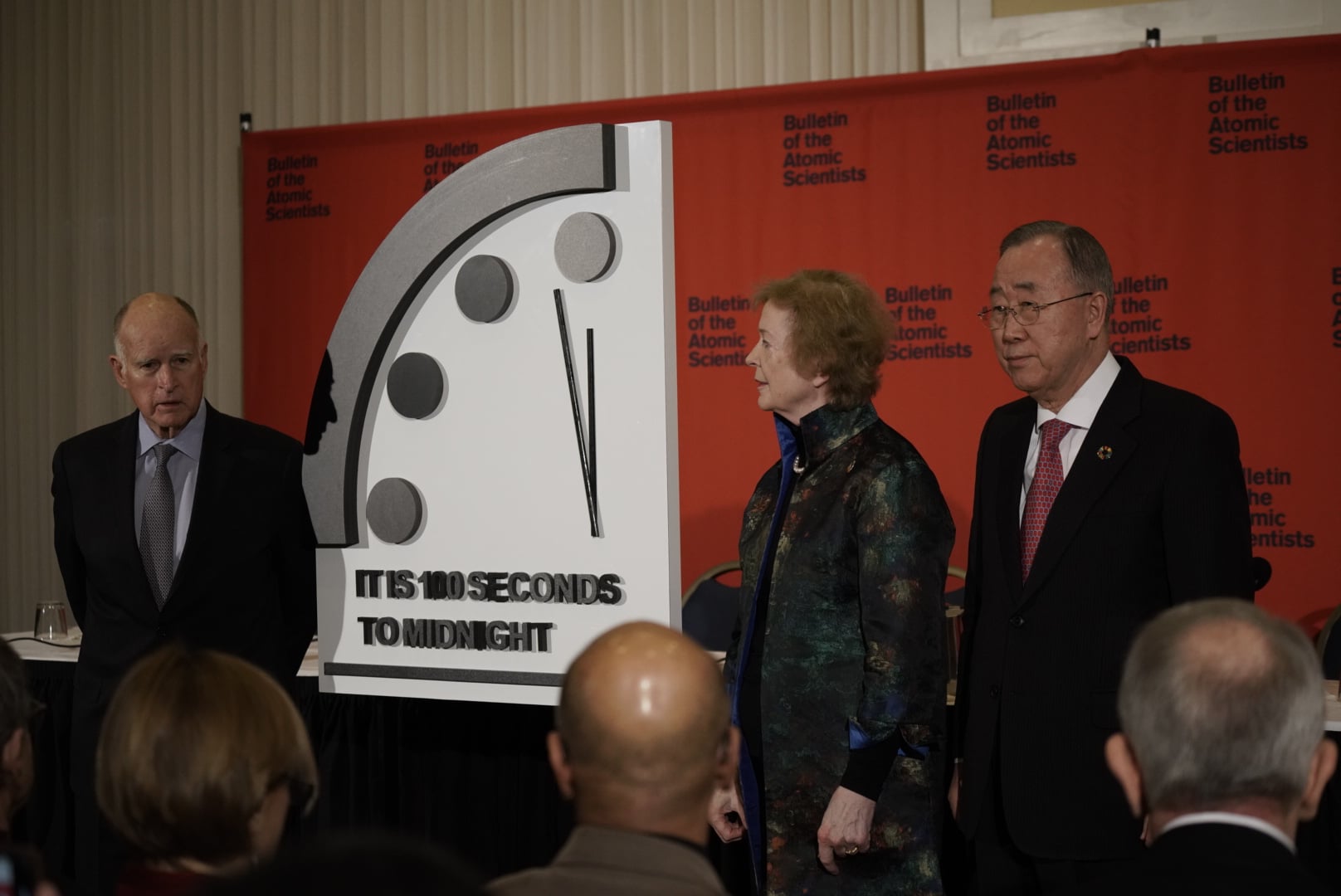