Beer on the Road for Peace

Michael Beer, our longtime Executive Director, is off to Korea and Japan to promote peace. His first destination is PyeongChang for the Peace Forum that seeks to strengthen the unification initiatives from the 2018 Winter Olympics.  The PyeongChang Peace Forum is an effort involving the Olympics and peace co-hosted by the President of the Korean Olympic Committee. Conference participants will also visit the Demilitarized Zone between North and South Korea. The Peace Forum will also address issues of world-wide militarism and war. We hope to initiate some new campaigns against war and militarism so we hope everyone will read the closing resolutions and announcements expected on February 12.

Michael will join a delegation to Tokyo to meet with potential hosts and venues for a convocation of sports people and peace activists at the time of the Olympics and the 75th anniversaries of the atomic bombings of Hiroshima and Nagasaki. This would be the first of a series of such convocations to be held every two years in connection with the summer and winter Olympics. The current partners in the initiative include members of the International Olympic Committee, former Olympic and Paralympic athletes, representatives of sports and peace organisations and some leading peace and disarmament organisations including Basel Peace Office, Parliamentarians for Nuclear Non-proliferation and Disarmament and the World Future Council. We hope to strengthen the global peace movement and deepen connections between sport and peace and the spirit of Olympism.

This just in... Michael sent a group photo from the opening session. See more about this impressive event at: http://ppf.or.kr/en/ 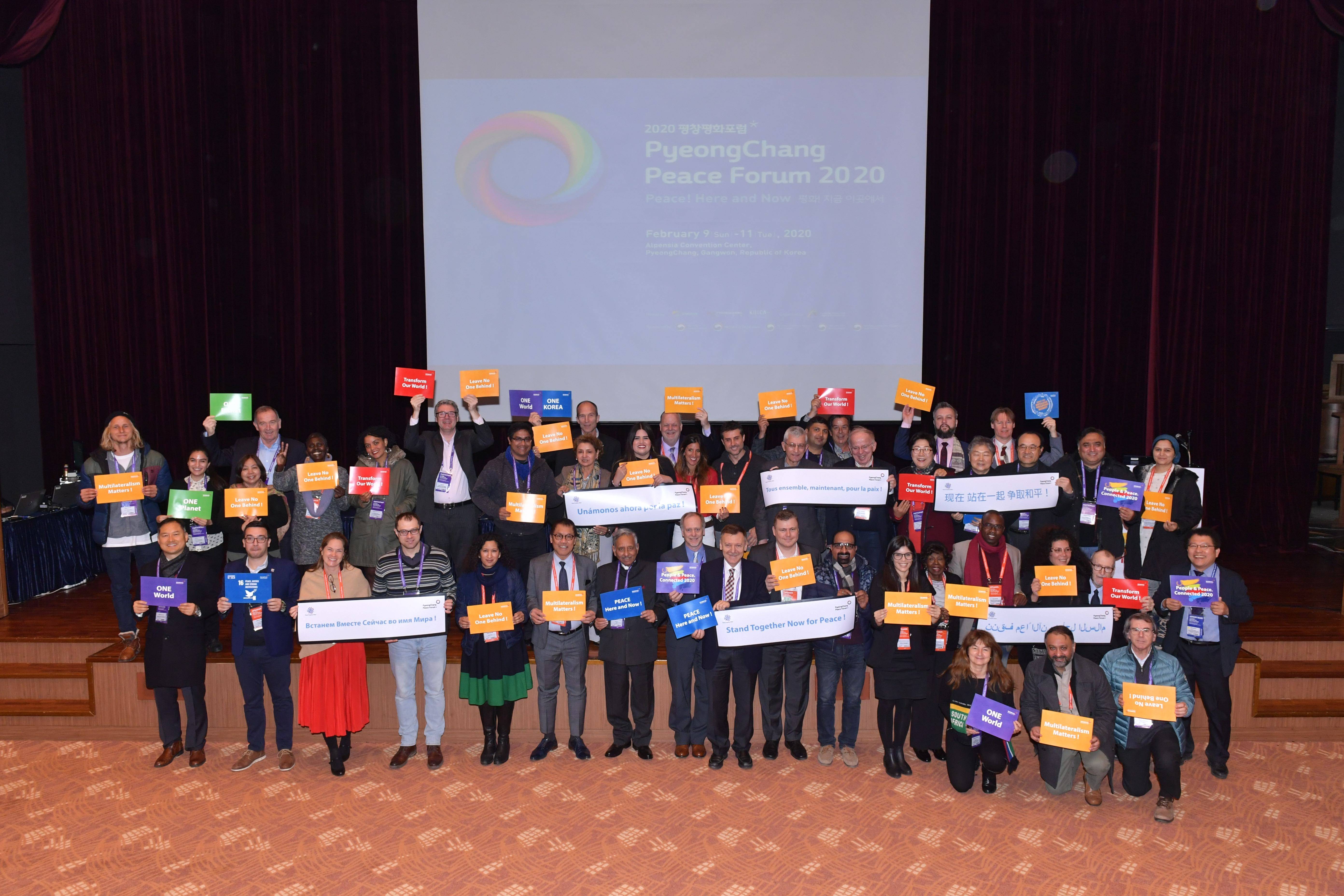 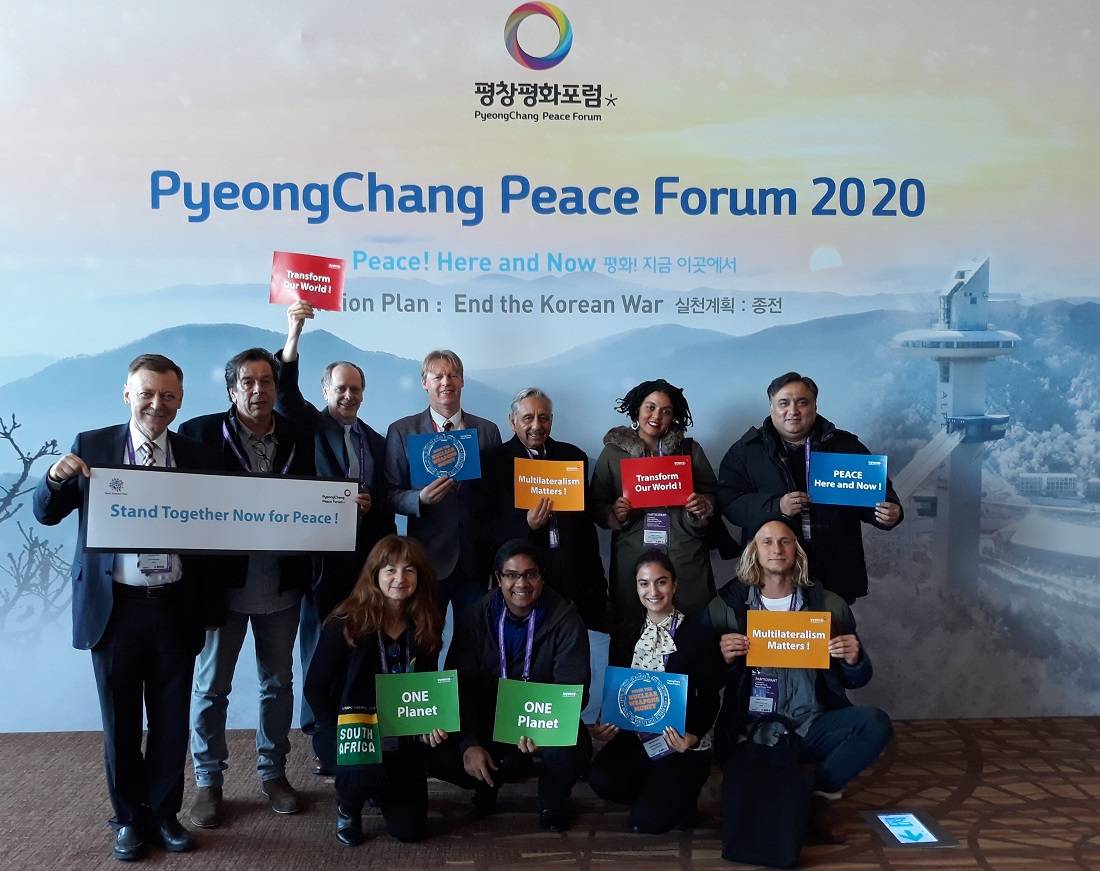 I have just returned home from the PyeongChang Peace Forum in South Korea! The Peace Forum worked to help develop an action plan to end the Korean War, building on the rapprochement of the 2018 Winter Olympic Games between North and South Korea. We also discussed how best to link UN sustainable development goals with the pursuit of global peace.  To accomplish these goals, the Peace Forum is developing an action plan with four tracks:

The Peace Forum addressed the role of sports in peace, including the role of the Olympic Truce Foundation and the International Olympic Truce Center. During this discussion, I asked the keynote speakers: “What more can the Olympics do to lessen a focus on nationalism and increase its role in promoting peace and international understanding?” (noted on the slide at 0:47 in the video) As an organization, we feel this is an important issue that represents a broader need to consider how all of the work we do is interconnected.

Nonviolence International seeks to invigorate the role of sports in promoting peace by organizing events this summer surrounding the Olympics. This summer marks the 75th anniversary of the atomic bombings of Hiroshima and Nagasaki, as well as the founding of the United Nations whose primary purpose was to stop the scourge of war.  We hope to remember these monumental events during the Olympics this summer. Details should be forthcoming by the beginning of March.

SDGs are incredibly important to the well being of humanity and the planet. Peace is not just incorporated in Article 16 but cuts across many of the SDGs. Unfortunately, we had an early report from civil society leaders that countries are falling short of their pledges. At Nonviolence International, we simply take this as further motivation to pursue our work across the world and spread the mission of nonviolence.

Other initiatives are also responding to the increased need to push for action. Peace 2045 is a new campaign calling on all countries to pass laws and constitutional changes that will outlaw war in each country by the year 2045. Additional campaigns include Stand Together Now that is pushing for sustainable development, and UN2020 which is calls for strengthening the United Nations more broadly.

This track largely focuses on efforts to improve the economy of Korea through unification and cooperative efforts between North and South Korea with regards to railroads, roads, trade, and tourism.

Michael Beer and international attendees at the never used Railway station in the Demilitarized Zone of Korea.

This track emphasizes the relationship between peace and the environment. At the Peace forum, we discussed turning the Demilitarized Zone into an eco-peace park and an international Peace Zone, upon the reunification of North and South Korea.

Many of us traveled to the DMZ to see the horrific scar of Korea. The barbed wire, the guns, and the checkpoints were a reminder of the mistrust, the misallocation of resources, and the existential dangers of modern war.

Nonviolence International supports the vital efforts to promote peace which were promoted at this conference. Nonviolent civil society movements, as well as nonviolent government policies, are urgently needed to end militarism, violent crime, and structural violence.

We’ll update you soon upon the publication of the Action Plan for peace and our efforts to promote nonviolence and peace at the Olympics in August in Japan.

Michael Beer has provided an update on the PyeongChang Peace Forum he attended in February. The committee recently released their message for peace which includes: peace between North and South Korea, transformation of the demilitarized zone (DMZ), and peace deliberations at the Tokyo Olympic games in Summer 2020. Click here to read the PyeongChang Peace Forum's Action Plan. 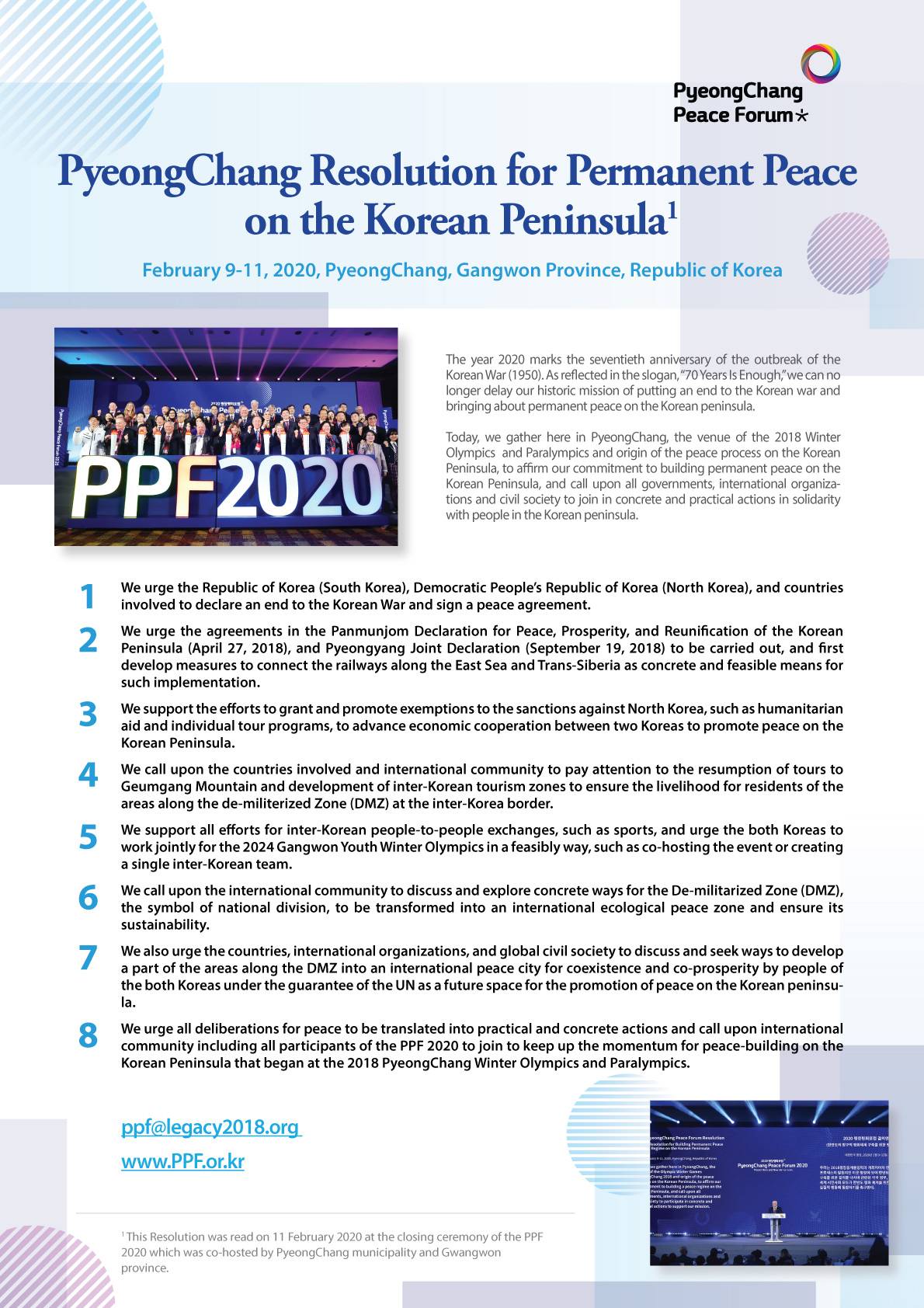