I could have done a river clean-up on Martin Luther King Jr. day, or gone to a celebration of his life, but instead I thought the best way to honor Dr. King would be to stand up to injustice. I decided to spend the day focused on gun violence.

I went down to Richmond Virginia on January 20th, Martin Luther King Jr. (MLK) Day, to lobby and counter a pro-gun rally. At 8am, I left Arlington Virginia in a Prius with a friend from Moms Demand Action ( a group opposed to gun violence). We had intended to support counter-protesters.

I was expecting enormous pro-gun crowds and feared that parking would be difficult. But we kept driving to the capitol and found mostly empty streets with some charter buses. In a parking garage, we pulled our little car into a space between two gigantic pickup trucks. There were many such large gas-guzzling vehicles with many out-of-state license plates.

We walked to the capital and passed many police working for the State, the city of Richmond and Virginia Commonwealth University. We talked to 2 African American men in their 30’s with big orange stickers that said “guns save lives.” We said we were going to join a lobbying event focused on the needs of people of color.  Unfortunately, this event was cancelled. They said they were veterans and wanted guns to provide home security. We wandered through the streets of the capitol that were shut off to traffic. We greeted some with “Happy MLK Day”.  We always got courteous responses, despite my colleague’s pussy hat and my buttons of progressive causes. We waded through crowds of men who were dressed up like soldiers and carrying semi-automatic weapons.  Looks like people were really into showing off their hardware.

I was afraid that some folks would see my anti-gun button and mob us. So I kept moving, kept my eyes down and never had anyone pay us attention.  People were happy to be there and everyone was polite. Luckily we didn’t see any Neo-Nazi flags and just a few confederate ones. We were surprised at the paucity of Trump stuff.

Everywhere we looked there were identical orange stickers that said “guns save lives”. It was surprising to see so few hand-made signs, although many folks wore t-shirts, hats, and jackets that had various messages.  There were almost no children but quite a mix of adult ages. Also, mostly men, and overwhelmingly European American. As a veteran of hundreds of protests, I’d say there were 6 to 8 thousand people, much fewer than I anticipated.  Folks did some chants of USA…and “Northam Out” but there were not many bullhorns. We took some selfies with the crowds in the background to post on our social media pages to let our friends know where we were…and then decided to get out of the crowds and go see our legislators. Unfortunately, the capitol was difficult to get to because of the crowds.

At 11am, we waited in a short line at the Pocahontas building, went through a metal detector, and headed up the stairs to cheer-up and lobby our legislators. None of the legislators were there, so we decided to thank the offices of 11 legislators who we have relationships with. Many had large groups of pro-gun advocates early in the morning, but by noon, the halls were remarkably empty despite crowds outside.  Many wanted to display their guns but were not permitted in the building with them. Perhaps this is because many Americans don’t know how to lobby or don’t see its value. So yes, the rally was burdensome on the government because so many police were mobilized and paid overtime. And yes, many legislative staff stayed home. But actually the overall legislative pressure from the pro-gun crowd was modest.

We thanked staffers (see photo below) for their commitments to end gun violence and talked to them about a range of issues that are important to us.  Many staff didn't want us to leave..and were grateful for our encouragement. Sure enough, the legislators passed gun control measures the very next day.

As we walked back to the car, the streets were rapidly clearing by 1pm. Organizers were picking up trash and cigarette butts off the streets. This is commendable. Rather than use their guns, they used classic nonviolent tactics found in our global database, such as rallies, flags, music, stickers and banners. 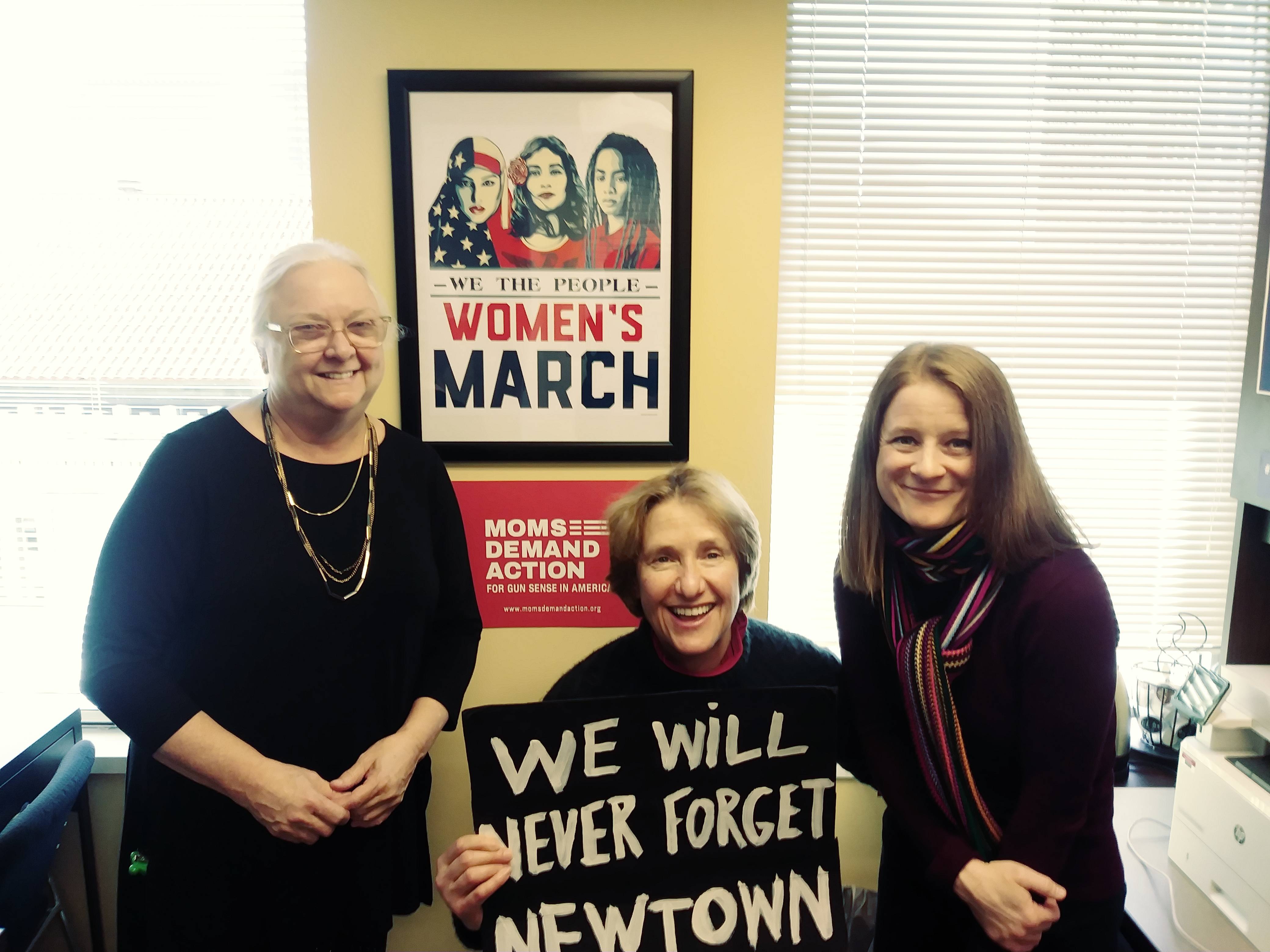