WANN: We Are Not Numbers

What is We Are Not Numbers?

We Are Not Numbers develops the communication skills of Palestinian youth living under occupation or as refugees, coaching them as they share the human stories behind the numbers in the news with a Western world that knows them only as stereotypes.

How did WANN start?

We Are Not Numbers was founded in early 2015, conceived by American journalist Pam Bailey and brought to fruition with the support of Ramy Abdu, board chair for the Euro-Mediterranean Human Rights Monitor. The project launched under the umbrella of Euro-Med, which provided significant logistical support; today, our fiscal sponsor is Nonviolence International.

The story behind our founding:

Twenty-one-year-old Ahmed Alnaouq lives in Deir Al-Balah, in the middle of the Gaza Strip. During the Israeli assault of the summer of 2014, his older and only brother was killed by an Israeli missile, while walking on the street near his home. A few weeks later, Pam connected with him on Facebook. Here is how she describes it:

Our chat went this way: “How are you?” I asked, rather inanely. “I am fine, doing well. How about you?” Ahmed responded. I could tell something was wrong, so I shot back, “Don’t just say ‘fine.’ Tell me something real.” The barriers down, he told me the truth: “I extremely miss my brother. I go to his grave all the time, and when I am alone, I burst out crying.”

Given Ahmed’s passion for writing and burning desire to master the English language (thus his major – a popular one in Gaza), I encouraged him to write about his brother, to celebrate him, rather than try to hide his grief from me. He was hesitant at first, given my “Western” identity. It turns out that Ayman was a resistance fighter with the Al-Qassam Brigades – so quickly assumed to be “terrorists” even by many pro-Palestinian activists. Yet the few little tidbits of information Ahmed shared made me want to get to know him better. Ayman clearly had played a very positive role in Ahmed’s life, and there was a reason why fighting the Israeli occupation with whatever weapons were at hand seemed to be the only option to the young man. It was, I believed, a critical story to tell – and share.

Over the next two months, I worked with Ahmed on his essay, pointing out patterns of English-language problems such as run-on sentences, and tagging spots that could benefit from an anecdote to make the story come alive.

When we were done, Ahmed commented that his English-language skills and grasp of storytelling techniques had improved more with my one-on-one coaching than from a year of classes. But with a future that looked dim – with no opportunity to apply what he was learning – Ahmed was increasingly thinking of following in Ayman’s footsteps and joining the armed resistance. At least then, he reasoned, he would be doing something to stand up for his people. My liberal, Western knee-jerk response was to say, “No, don’t do it. Your family already has lost one child. There are other ways to resist.” But then I realized that I had nothing to suggest as an alternative. Thus was born We Are Not Numbers.

What is We Are Not Numbers?

There are many Ahmeds in Gaza, who are aching with loss, struggling to eke out a living and feeling neglected by the world. Fifty percent of the population are between the ages of 15 and 25 – about 70 percent of whom are unemployed. Their stories deserve to be brought to the attention of the Western world whose foreign policy has caused so much of their distress. At the same time, we need to give these youth a way to turn their writing into a mission with a purpose.

WANN recruits young, developing English writers. To provide the coaching they need to reach their full potential, each participant is assigned a mentor who is both a native English writer (so rare in Gaza these days) and published author. The mentors coach them on their language/writing skills and the project publishes their essays, poems, etc. on the realities of their lives to educate Western audiences and build bridges based on greater understanding.

In the process, we encourage freedom of expression and civic engagement and the youths build relationships with influential advocates around the world.

What are our goals?

2) Nurture self-esteem through self-expression and publication of their work.

3) Foster international connections that broaden participants’ world views, lessen the feeling of isolation and provide useful references when applying for internships and scholarships.

4) Provide a supportive creative outlet and environment that promotes positive mental health and in which participants build capacities in leadership, teamwork, critical thinking and advocacy.

5) Amplify youth voices to help educate the Western world on the realities of life under occupation. 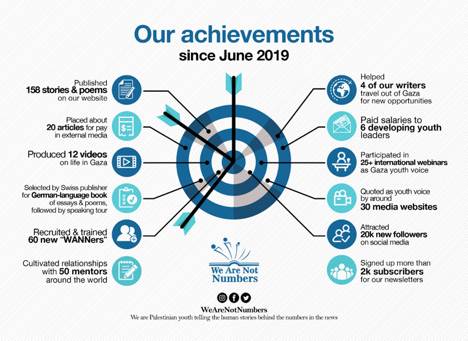 Some of our special projects: 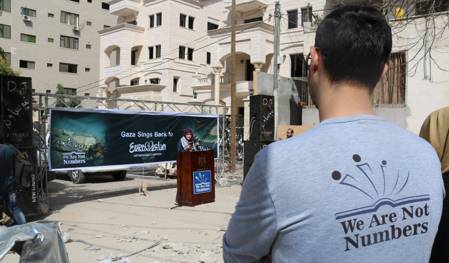 “Dreams in the Crosshairs” short film

We Are Not Numbers rap

We Are Not Numbers is Gaza’s first journalism academy 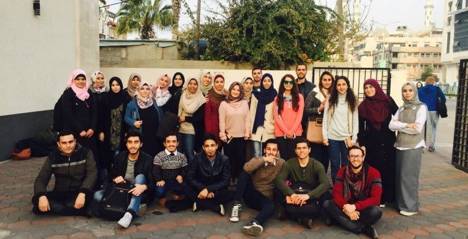 Why should people contribute with individual donations?

When the world talks about Palestinians living under occupation and in refugee camps, it is usually in terms of politics and numbers – specifically, how many killed, injured, homeless and/or dependent on aid. But numbers are impersonal, and often numbing. What they don’t convey are the daily personal struggles and triumphs, the tears and the laughter, the aspirations that are so universal that if it weren’t for the context, they would immediately resonate with virtually everyone.

To survive, grow and resist in Gaza, we need more than the typical aid, however. As youth, we know we are the next generation of leaders, and more than anything we need to develop our creativity, be given a platform through which we can be heard, develop our skills, forge international connections, and also, simply, HAVE FUN.

Where can we learn more about us? 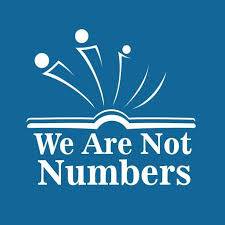 Donate to We Are Not Numbers