The Many Faces of Nonviolence - Ann Wright

Ann Wright was on an assignment in Mongolia when she resigned from the State Department in March 2003. Having served in the U.S. Army for over two decades retiring as a colonel and in the U.S. Foreign Service for sixteen years, she knew the devastating effects of war. Ann was opposed to the Iraq War and felt that she could not in good conscience represent the United States in the conflict. Because of this, she resigned from the U.S. Department of State to dedicate herself to promoting nonviolence.

Ann decided to shift her efforts to peace and nonviolent protest. She started working with organizations that were trying to stop the United States government from using war as a first resort. When talking about using war as a way to solve global issues she says, “use of the military and war seldom results in stability.” She knew that there had to be a nonviolent way to solve international disputes. As a result, Ann began a new adventure working with civilian-run organizations instead of government agencies. She advocated for nonviolence in Washington, DC and around the US talking to tens of thousands of citizens on alternatives to war. Since her resignation from the U.S. in 2004, after nearly two decades of commitment to nonviolence, Ann can testify that most Americans don’t want any more wars, yet U.S. politicians, no matter which political party is in power, still favor war and mobilization.

Ann began being personally involved in the situation in Israel and Gaza when she left the U.S. Diplomatic corps in 2003. She decided she needed to see for herself what was happening on the ground when Israel first attacked Gaza in early 2009. She went to Gaza in January 2009 to observe with her own eyes the huge level of destruction that a major military power like Israel had done in its 27 attacks on the small, unarmed territory of Gaza. The loss of life-over 1400 Palestinians killed, 5,000 wounded, and over 10,000 left homeless-inspired her to take action. In 2009, she went back to Gaza six times with CODEPINK Women for Peace to bring more people to Gaza so they could meet with survivors, document the damage, and return home to write stories about what they saw. Later in December 2009, Ann and CODEPINK brought over one thousand people to Egypt for the Gaza Freedom March to march in Gaza in solidarity with the people of Gaza on the first anniversary of the Israeli attack. However, Egyptian border police allowed only about 100 people to enter Gaza, and the rest had to remain in Egypt and used a number of nonviolent tactics including staging demonstrations in Cairo to bring international attention to the blockade in Gaza including sit-ins outside the US Embassy.

In 2010 Ann continued to support Palestinians living under the Israeli naval blockade of Gaza by joining the Free Gaza Movement. In 2008 this organization sent two boats full of people and medical supplies to Gaza and took out of Gaza some Palestinians in need of healthcare. In 2010 the Free Gaza Movement expanded the of challenging the illegal Israeli naval blockade of Gaza by sending no just two boats, but a flotilla of boats to Gaza. This project became the Freedom Flotilla Coalition. In this 2010 mission, they sent three cargo boats of medical supplies along with three passenger boats to Gaza. Ann was on one of the passenger boats when Israeli forces attacked the flotilla for attempting to enter the naval blockade zone. Nine people were executed by Israeli commandos on the boats, and one later died of Israeli gunshots. More than 50 of the unarmed, civilian activists aboard the boats were shot by Israeli commandos. See a list of casualties here. After raiding the boats in international waters, Israeli police arrested nearly 700 people and brought them to Israeli prisons. They were deported which meant they could not return to Israel for ten years. Ann has been deported from Israel three times meaning she technically has a 30 year ban to travel to Israel and therefore also to the West Bank. After her initial deportation, Ann returned to Gaza through the Rafah, Egypt crossing in 2011, 2012, and 2013. 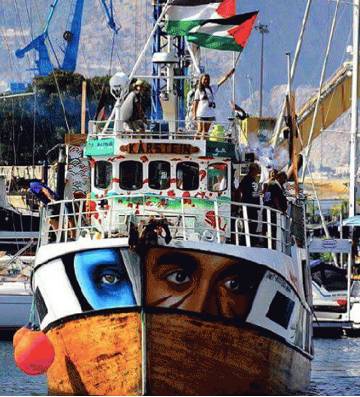 The Freedom Flotilla Coalition is an international organization of 13 national campaigns participating in the movement. In the 2018 flotilla, four boats in the flotilla visited twenty ports before reaching Sicily, from which they travel to Gaza. In each country they visited, they worked with Palestinian solidarity organizations to educate Europeans about the horrors of the illegal Israeli blockade of Gaza. By stopping at multiple ports to meet with supporters, the Freedom Flotilla Coalition is able to further spread the message about the suffering people endure in Gaza from the Israeli land and sea blockade. The journey to attempt to break the illegal naval blockade of Gaza typically ends about forty kilometers off the coast of Gaza when Israeli forces intercept the flotilla and arrest passengers. The long journey brings international media attention, except in the U.S., and awareness to the suffering in Gaza. With the help of their international partners, the Freedom Flotilla Coalition has sent boats to Gaza in 2011, 2013, 2015, 2016 (an all women’s trip), and 2018.

US Boats to Gaza, the United States chapter of The Freedom Flotilla Coalition, is dedicated to educating Americans about the situation in Gaza. Ann and other organizers travel across the United States holding educational events to spread awareness about Gaza. Many educational events help with funding so the flotilla can keep sending ships to attempt to break the illegal Israeli blockade of Gaza. The flotilla’s dedication helps Palestinians remain hopeful that the world is not forgetting them.

Ann Wright came to work with Nonviolence International when she met our co-director, Michael Beer. They ran into one another at a number of peace events around the DC Metro area. Today Nonviolence International serves as the fiscal sponsor of US Boats to Gaza. Ann and Nonviolence International also support We Are Not Numbers, a platform for young Palestinian writers and artists to find their voices and tell their stories as journalists. In fact, We Are Not Numbers has released two documentaries showing the plight of Palestinians in Gaza. The first is an award winning short film, “Six Miles Out,” about fishermen struggling to make a living under the blockade. The other, called “Dreams in the Crosshairs,” is about the permanent disfigurement and amputations many Palestinians suffer under Israeli violence on the people of Gaza. The films help raise awareness and inspire international solidarity with Palestinians in Gaza and the West Bank.

Through all of the suffering she has seen, knowing so many people willing to challenge Israeli and U.S. government policies towards Palestine and are willing to stand up and encourage nonviolent approaches to resolve international issues gives Ann hope. She says, “I know courage when I see it, and I have seen more courage in the brave, determined citizens...than the heavily armed forces arrayed against them.” Grassroots movements around the world show Ann the dedication many citizens have to use peaceful and nonviolent approaches to conflict resolution. She has found that civil society pressures politicians to act peacefully rather than to initiate violence. For example, United States citizens pressured President Obama to refrain from attacking Syria in 2013 over the alleged chemical attacks by the government of Syria. President Trump’s decision not to go to war with Iran also came from civil pressures to remain peaceful and avoid war. Civilian long term dedication to promoting peace and nonviolence gives Ann hope in times of violence and suffering.

The Freedom Flotilla Coalition has begun its fundraising campaign for the May 2020 Flotilla by hosting fundraisers across the country to raise money to purchase the next boats to challenge the Israeli blockade of Gaza. To learn more about the campaign visit usboatstogaza.org and to donate please click here 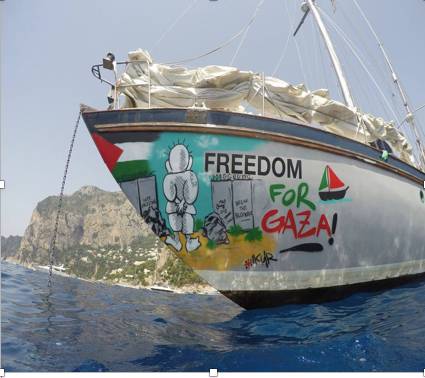