NVI is proud to announce Michael Beer and Mohamed Brahim's (of The Sahrawi Association, USA) important piece on Common Dreams. Recently, Morocco broke a 29 year cease-fire with the Polisario of Western Sahara by entering the buffer zone, attacking the nonviolent protesters, and re-opened the illegal border trade route. 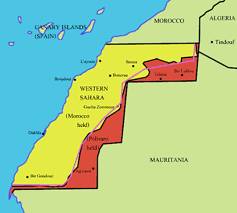 In their op-ed, Michael and Mohamed criticize the US's role in the Moroccan-Western Sahara conflict and call on the US government, the Biden/Harris administration, corporations, and civil society to take actions:

"Sadly, the U.S. government has provided vast economic and military support to the Moroccan government. Last year Morocco purchased $10.3 billion in weapons from the US, totalling more than Egypt, Israel, Saudi Arabia and UAE combined.

There is much a Biden/Harris administration can do to help Morocco end its occupation of Western Sahara. The US government, corporations and civil society should:

The world has known how to nonviolently resolve this issue since 1963, when the United Nations called for a referendum on its future status. Morocco has refused to cooperate. We must act swiftly to prevent war and further conflict, end the occupation, and allow Sahrawis to make their decision on union with Morocco or independence.

There is potentially bi-partisan support for this approach. Senator Inhofe (R-OK) and Senator Leahy have spoken out strongly for the rights of the Sahrawi for self-determination. However, we also need Democrats and other Republicans to stand up and speak up for international law and to condemn attacks on nonviolent protesters and the occupation. Their silence is deafening."

Here is the full article.

The op-ed is part of NVI's ongoing support for nonviolence and peaceful resolution in Western Sahara. We issued a press release calling for actions and cooperation among the people of Western Sahara, Morocco, multinational corporations, the United States, and all countries.

"Nonviolence International calls on the people of Western Sahara and their Moroccan allies to maintain a nonviolent discipline and to work for their political objectives without intentionally harming Moroccans.

NVI calls on the United States and all countries to implement an arms embargo on both sides and pressure the parties to resolve the conflict nonviolently.

NVI calls on multinational corporations to refrain from buying or obtaining Western Sahara natural resources until a UN administered referendum is held.

We also call upon the people of Morocco to pressure their government to allow a referendum so that stability can be brought to the entire Mahgreb. The current conflict threatens to develop into a greater conflict between Algeria and Morocco, when the goal should be cooperation and coexistence."