The Many Faces of Nonviolence - Community Media Network

Fada wanted to be a journalist. At fifty, long married and the mother of grown children, she had not yet had the opportunity to pursue her dream. Daoud Kuttab, Director General of Community Media Network (CMN), still remembers Fada’s excitement as she came to her first radio training, “she had spunk, but she was still not sure of herself yet.”

She has come a long way from her initial trainings, she has two phones which are constantly in use calling the mayor and other community members. Finally realizing her dream of becoming a journalist, Fada now writes and publishes stories about her community. Empowering individuals like Fatah through radio training is only half of what the CMN does.

Most media in Jordan is either government owned, or in some way affiliated, which has immense implications for what is aired. CMN is proud to say that they are an independent organization, focused on a more holistic representation of thought and experience in Jordan. It was not without obstacles that CMN got to where they are now.

In the early 2000’s, FM radio was not allowed in Jordan. However, as King Abdullah ascended to the throne he announced that the internet, then gaining popularity throughout the Arab world, would be free. Seizing this opportunity Amman Net was born and on November 15, 2000, became the first online Arab radio station. After securing approval (from a government official), Daoud Kuttab—Amman Net’s founder—took the first steps toward a free Jordanian media. Whereas further strides have been made towards the deregulation of these media networks, there is still more progress to be done, namely in FM radio.

In 2005, Amman Net received it’s licensing to become an official FM radio station. By 2007 what was Amman Net expanded into Community Media Network, a not-for-profit NGO that can raise enough funds to maintain the radio licensing they require in Jordan. Because CMN is neither a commercially nor publically-run media network, they are able to produce government critiques and compelling exposé into the harrowing stories of people living in Jordan, which aren’t typically given attention. Along with this, understanding the difficult process that acquiring and maintaining a radio station requires, makes advocating for better media laws in the Arab world a top priority for CMN.

The Network has a very proactive role in nonviolent action, considering themselves agenda setters who actively correct misinformation and use journalism to confront pressing social problems. They foster understanding between people who may misunderstand each other, or not even be aware of the others existence in the community. “You have to be a part of the solution, not just a part of the problem,” said Kuttab, and his organization does just that. Beyond simply reporting news, CMN offers a platform for the marginalized or underrepresented to speak about their experience. Jordan is a very diverse country, a fact that has only strengthened in the past decade. CMN works with multiple different groups in the country in order for everyone to understand who their neighbor is. 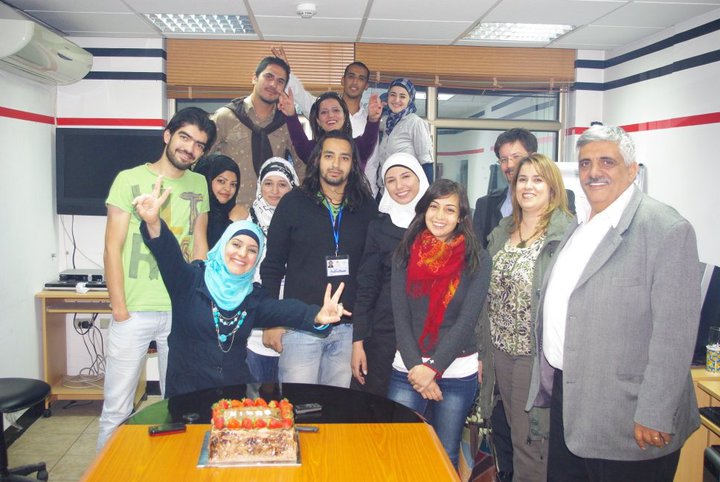 One of Kuttab’s favorite examples of this is a series produced by CMN, “Mosaic,” which focuses on Jordanians with different ethnic (Circassians, Chechnyans and Kurds) backgrounds as well as other people living in Jordan with diverse ethnic and religious backgrounds. They are determined to further an intersubjective understanding of culture and community which prioritizes voices which are under-represented in popular media. To this end, CMN interviews members of disenfranchised groups in Jordan, including taxi drivers, disabled people, women outside the capitol of Amman, and Syrian refugees in Jordan.

Due to enormous expenses demanded by the government for being an FM radio station, plus employing a full time staff, CMN relies on donations from international individuals and groups. Recently, the Canadian government helped to fund a project entitled, “Syrians Among Us.” This radio series highlighted the experiences of Syrian refugees living in Jordan, offering them a platform to explain their experience, hopes, and possible issues they, and by extension their community, may have been having at the time. On this subject, Christopher Hull, the Political Counsellor from the Canadian Embassy in Jordan said: “You are sharing stories that need to be told — humanitarian stories about the daily lives and struggles of Syrian refugees in a world where other crises compete for attention.”

The results of CMN’s hard work across Jordan are tangible—both in the lives of the individuals they have touched and in their contributions to the upholding the principle that media should be free and fair. Empowering and educating individuals like Fada to build bridges within their society is not just a goal for this organization, but what they have done throughout communities in Jordan.

I lived in Amman, Jordan for four months and was in awe of the diverse community that I was able to connect with while there. While this community is existent and expansive, it is hard to find unless you are intentionally looking for it. Community Media Network is unique not only because it brings this diversity to the forefront of society, but because in doing so it empowers those same individuals. I cannot express the importance of, and my personal appreciation for, this organization enough. To learn more about Community Media Network please visit their website