How did King learn about Gandhi? Ask Rev. James Lawson

What a joy it was to see the widespread support for the great nonviolent leader John Lewis. His funeral included many remarks worth pondering at this critical time. Below, we share one video that was particularly moving to us.

But first, there is one correction we'd like to offer to those declaring that Rep. Lewis was on the first Freedom Ride. He was not and that is something John Lewis knew well. As we stand on his shoulders to attempt to address the pressing issues of our time, he stood proudly on the shoulders of those who came before him. When I was a young activist, I got to spend several wonderful extended visits with Wally and Juanita Nelson at their farm next to the Traprock Peace Center in Massachusetts. They were both shinning lights explaining the transformational power of love and nonviolence. Wally told us of his time on the first Freedom Ride also known as the Journey of Reconciliation. This integrated bus ride took place in 1947 and was a key inspiration for John Lewis to attempt his own version of this bold, beautiful, nonviolent direct action. Wally was not alone on that first Freedom Ride. He was joined by Bayard Rustin mentioned below, Igal Roodenko, who I get to work with through the War Resisters League, George Houser, James Peck, and Homer Jack. Friends, let us also say their names for their approach guides us forward and calls us on to work as tirelessly as they did for peace and justice.

We urge all those now praising John Lewis to understand how he was brutally attacked for his loving activism for justice. And, suggest we would do well to pull our gaze forward to today's movements and notice that there are still brutal forces of the status quo fighting against history. It is easy to sugarcoat history, but harder to see the reality of struggle when we are in the midst of it. You can't praise the Civil Rights Movement while attacking Black Lives Matter. They are part of one long painful, persistent, and powerful March for Justice.

We at Nonviolence International believe it is particularly important to understand how the study of the vast power and potential of nonviolence has advanced over the years. Sadly, our society has foolishly poured countless resources into the study of war and violence and devoted much less time and attention to creative, constructive alternatives. Still, people all over the world have been experimenting with nonviolence for thousands of years.

One vital link to the modern nonviolent movements is from those who studied Gandhi and then shared that learning with Dr. King. We raise up the ground breaking activism of Bayard Rustin who worked for the Fellowship of Reconciliation and co-founded the Congress of Racial Equality. Rustin was an essential link helping Dr. King become inspired by Gandhian nonviolence.

We are thrilled that many people worldwide got to hear from the great Rev. James Lawson as he celebrated Rep. John Lewis. Recently we posted a piece from Mary King, who worked closely with John Lewis in which she reminds us how Rev. James Lawson met "Rev. Dr. Martin Luther King Jr. at Oberlin College in February 1957, upon returning from teaching for three years in Maharashtra state in India. Lawson would become the critical interpreter of Gandhian insights for the U.S. mid-20th century Black community, selectively introducing knowledge from India’s struggles against European colonialism." Then Lawson trained Lewis and today their legacy is ours to carry forward. 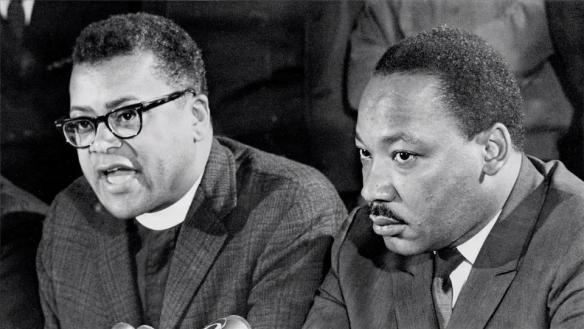 We at Nonviolence International love to see the universal praise for John Lewis, but we ask the politicians who praise him, but whose actions contradict all he was committed to, please don't use his kind loving heart to attempt to turn him into your teddy bear. He was a bold, brave, nonviolent fighter for justice especially for voting rights. Honor him by not only renaming the bridge, but also by passing the voting rights legislation named after him.

Some former elected officials also spoke at the funeral.

If only they governed with the same commitment to peace and justice as declared in their remarks yesterday.