The Many Faces of Nonviolence - Andrew Batcher

The Many Faces of Nonviolence

In the autumn of 2011, different colored camping tents scattered the grassy area of Washington D.C.’s popular McPherson Square. These tents varied in sizes, as the smaller ones were used for sleeping while some larger ones were utilized as kitchens, storage areas, libraries, and meeting places. The individuals who organized and lived in this ‘tent city’ were part of the Occupy Wall Street Movement fighting for economic justice. One man who spent multiple days and nights in McPherson Square was former Nonviolence International (NVI) employee, Andrew Batcher.

Batcher joined the team at NVI after completing his Master’s in Social Justice in Intercultural Relations at the School for International Training (SIT), a Vermont-based educational institution that trains individuals to become successful global leaders and citizens. Batcher already possessed a great deal of knowledge about the many ideas and theories surrounding nonviolent action and movement building, so he enrolled in SIT to supplement his learning with hands-on experience. SIT provided Batcher with the necessary training and skill-building tools that would assist him in becoming an effective activist and a great addition to the Nonviolence International team.

According to Batcher, the height of his work at NVI occurred after the Occupy D.C. protesters removed their tents from McPherson Square. Although they had left their main protest site, the Occupy D.C. Movement as a whole still had a driven and passionate base. Organizers used this momentum to transform the movement, which they now called Occupy 2.0. Various leaders took charge of different projects that they believed would be valuable to the movement. Batcher worked with a team to create the D.C. Learning Collective, which partnered with schools to support student-led movements.

During his time with the Learning Collective, it wasn’t uncommon for Batcher to observe the emergence of strong movements, relationships, and leaders. One of Batcher’s favorite memories from working with the D.C. Learning Collective occurred when he witnessed a group of high school students stand up for their right to protest. Commonly, when students take part in protests or walk-outs for a certain cause, they will stop if they are reprimanded by the school’s administration. Batcher was pleased when he saw a group of students stick to their principles even when faced with an official reprimand. Frustrated over the negative treatment of their immigrant teachers, this group of students organized a school walkout. As a result, the administration suspended the organizers and held a school assembly that attempted to justify their negative behavior and dismiss student concerns. Batcher was even more pleased when he saw that the community sided with these fearless’ students actions.

According to Batcher, society has improved in several areas due to the Occupy D.C. movement. The underlying theme of all these changes is the same: the conversation has changed. While no legislature has been passed to address the concerns of the millions who protested in Occupy movements around the country, it has become more acceptable to talk about things that may have been taboo prior to movement, such as criticizing capitalism.

After his work with the Occupy D.C. movement and the Learning Collective, Batcher continue his activist efforts by protesting against various extremist groups in the United States. While nonviolence is not always the first thought for others partaking in these movements, Batcher has used nonviolent tactics that he strengthened during his time at NI in order to achieve impressive victories. When asked to reflect on his time at NVI, Batcher responded, “It’s important to challenge the stigma of movements and activists, because the stigma prevents people from joining. I think Nonviolence International does a really good job at that.”

Our organization is proud to be tied to Andrew Batcher, the work he has accomplished at NVI, and what he has gone on to do in his own life. As Nonviolence International celebrates its thirty years of impressive history, we also celebrate Andrew Batcher. 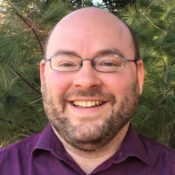